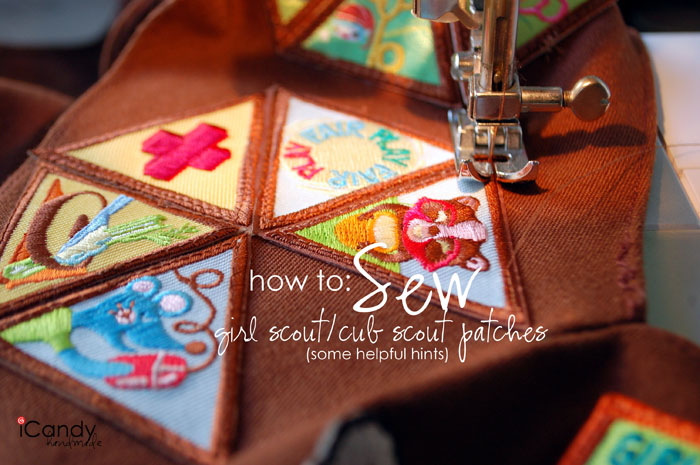 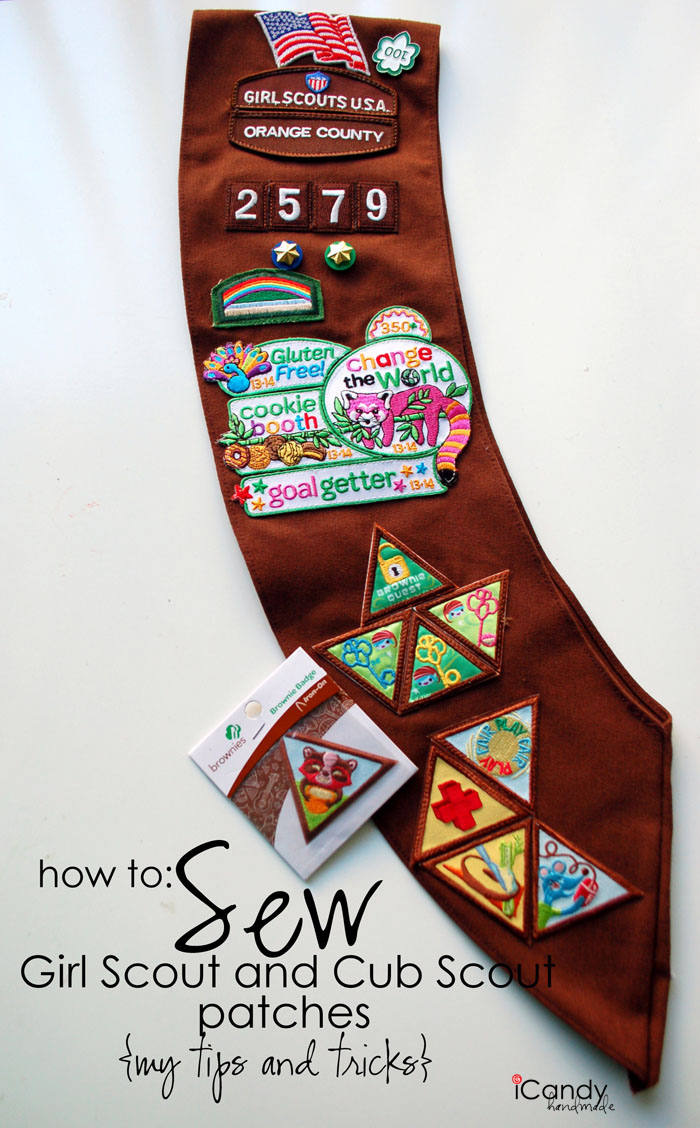 I have a friend who is a Girl Scout troop leader.  Actually, I have a few friends who are troop leaders of their daughter’s GS troops, and a couple of years ago, one of them  asked me if I would  be willing to sew her daughters patches on her vest for her.  Well, what started out as sewing one girls patches has turned into sewing several hundred patches for several different troops and packs in our area.  I’ve gotten it down to a science, so I thought I’d share some of the things that make it a little easier.

Although these patches are generally iron-on patches, I’ve re-sewn so many previously ironed-on patches to make me think that sewing them on is just the best (not to mention if you have to move them!)

So–this post is for the beginner sewers out there.  If you’re a mom with a girl Scout or a Cub Scout, or a Boy Scout…here are a few tips and tricks to make your life a little easier.

Trick #1) Thread: Either match your pieces or go Transparent

You want to match your bobbin thread to your base piece (from now on, I’m going to call it the sash, as that’s what the pictures are showing…but it may mean your cub scout shirt, or your daisy vest or whatever), and your top thread to your patch.  When I first started sewing these patches, I was swapping out my thread for each patch.  That works out just fine if you’re only sewing one or two patches on at a time, but if you’re doing a lot of patches, all with different colors, here’s my magic:  Coats Transparent thread…I match the sash color with the bobbin, and use this on the top.  I can use this same thread for every patch, and you can’t see it!  Love it! (I bought mine at Jo-Ann) 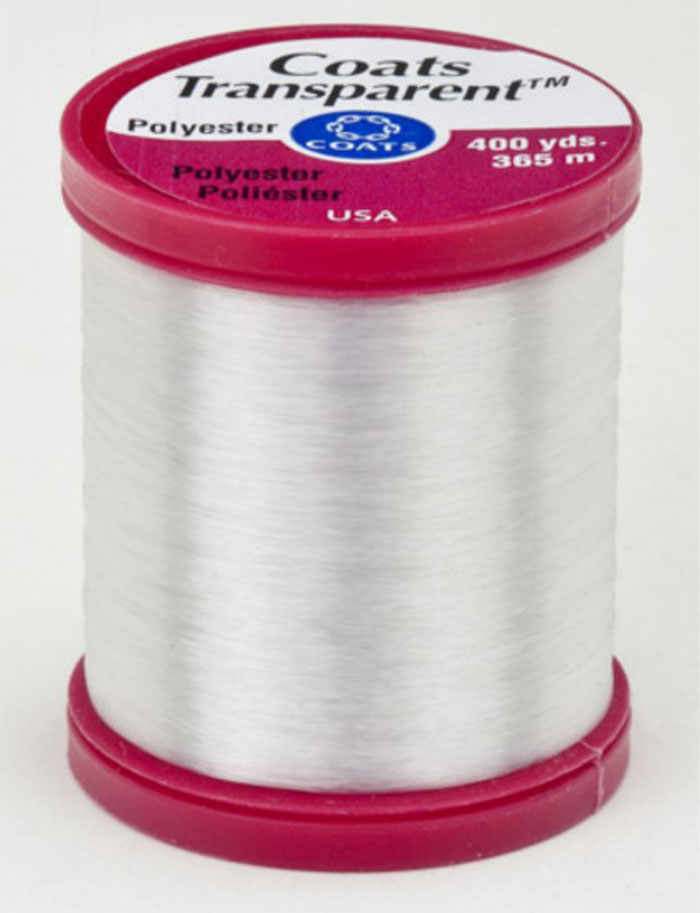 Trick #2) Nix the Pins: Blue Painter’s Tape is the way to go!

So, lets be honest, you can pin and re-pin, but these things are so thick and bulky that they never lay exactly straight (and that’s a big deal when they all have to fit together in a very particular way (aka…cookie patches) So, forego the pins, and bust out a strip of blue painter’s tape instead…Here’s how I do it.  (beginners, you can do this!)

a.) Place your patch where it needs to be…For this example, I’m using the Raccoon patch below. 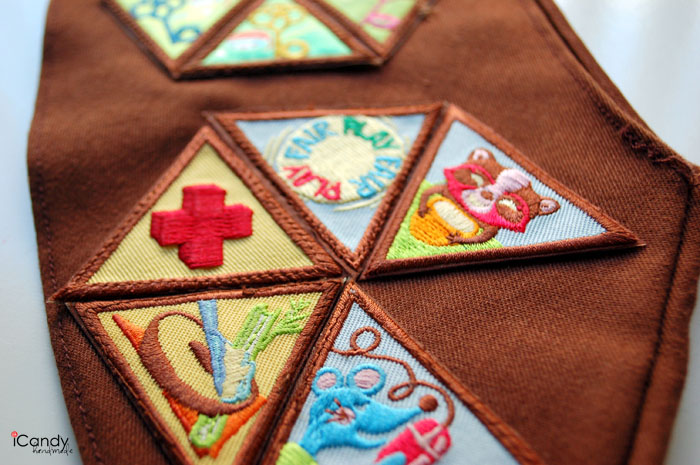 b.) Use a long enough strip of tape to cover a good third of the patch as well as either side of the  patch to keep it in place, as shown below: 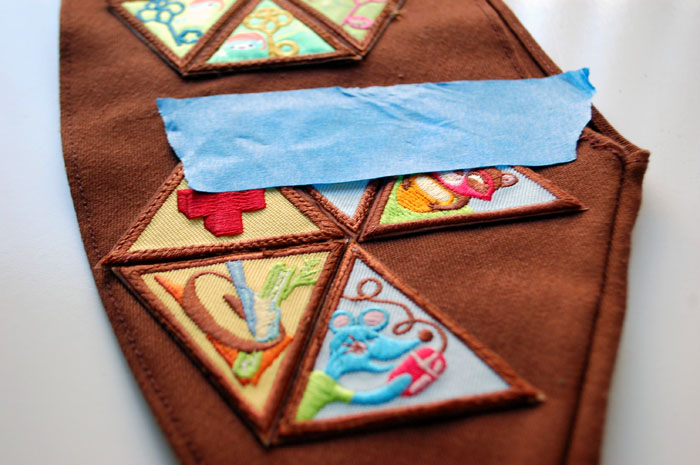 c.) Start sewing near one side of the tape.  The picture below shows my starting point: 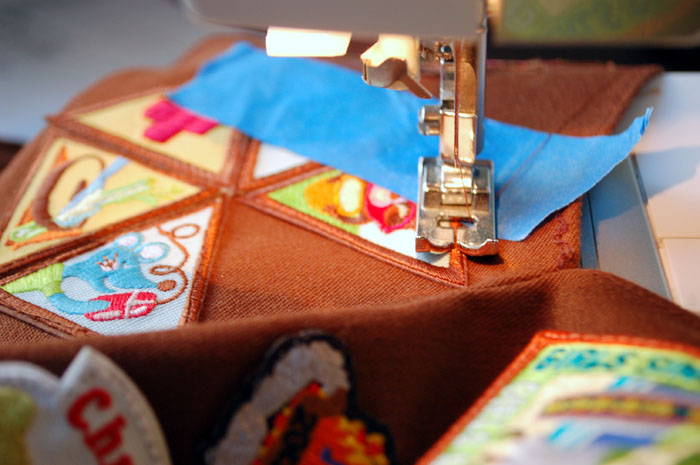 d.) Sew in a straight line until you get to the corner (I’m sharing this step with beginners because this changed my life when my MIL finally told me about this trick… Once you hit the corner, make sure your needle is down.  If it’s down, you can raise your presser foot, and nothing will move….try it! 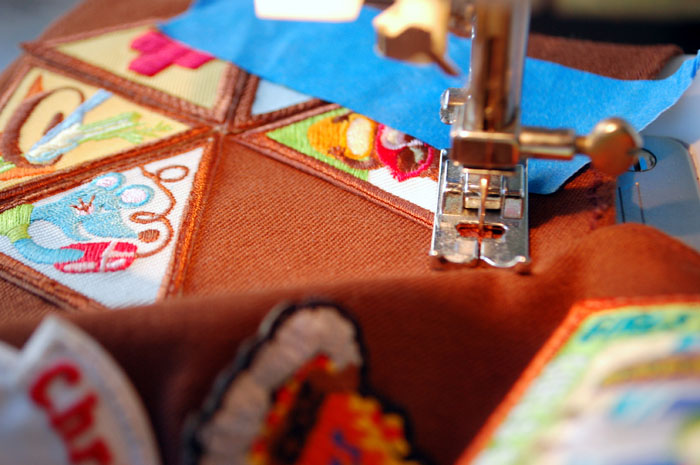 e.) See?  Needle is down, presser foot is up…no problem, now you can pivot your fabric around til your hearts content…but for now, just swivel it so that you’re in line to stitch down the next side of your patch.  Turn the fabric, put your presser foot back down, and then start stitching again. 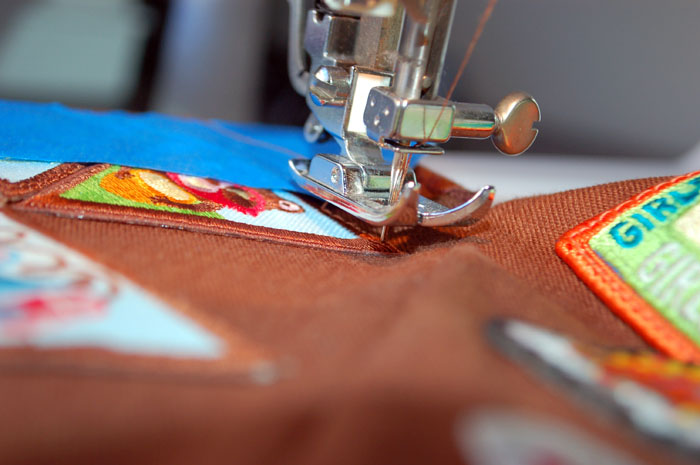 f.) Carry on the same way, all the way around your patch.  When you make it to the other side of the patch, remove your tape (you’ve now stitched around 2/3 of it, and then finish it off.) 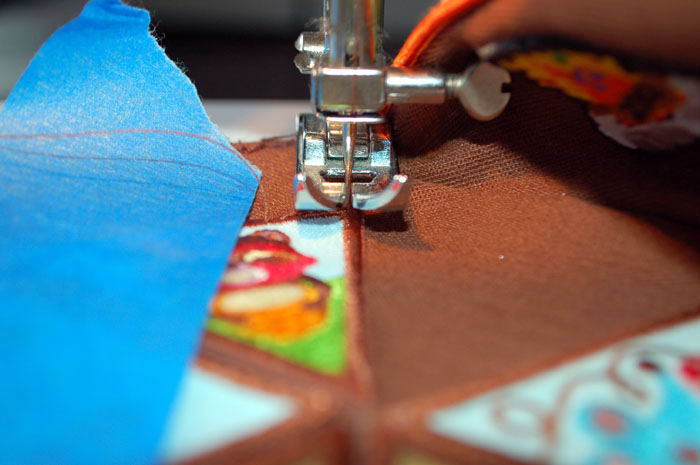 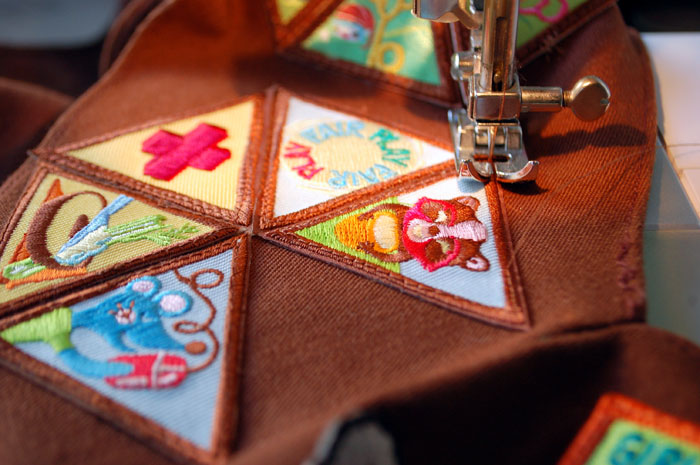 So, for this Brownie Sash, I used brown bobbin thread, here’s the view of the back, and brown thread on top.  (or invisible thread would have been perfect, too!) 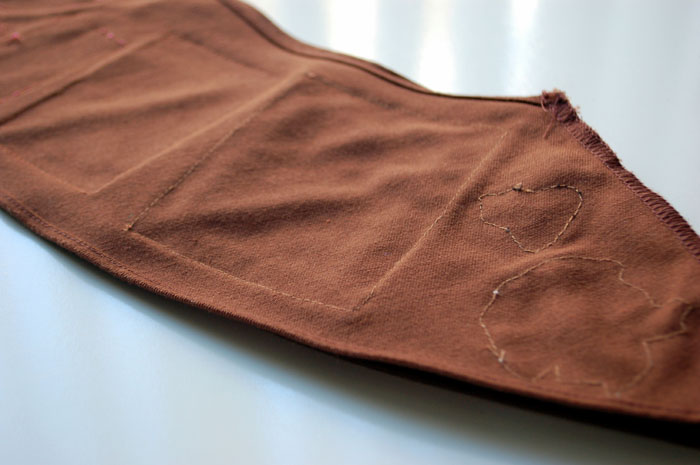 Trick #3) Patches that fit together– sew them together first, then sew them onto your Shirt (or sash)

For example, the Pack number on the side of my son’s Cub Scout shirt: You can stitch the 9 right in the center, and then attempt to sew the other two or three numbers on after that and make sure they’re totally straight and even, but that makes me want to pull out my hair!  Instead, use a large zig zag stitch to stitch them together first (do not back tack at all) and then attach them!

Here’s the thing.  In the picture below, the numbers aren’t sewn together exactly even, right? 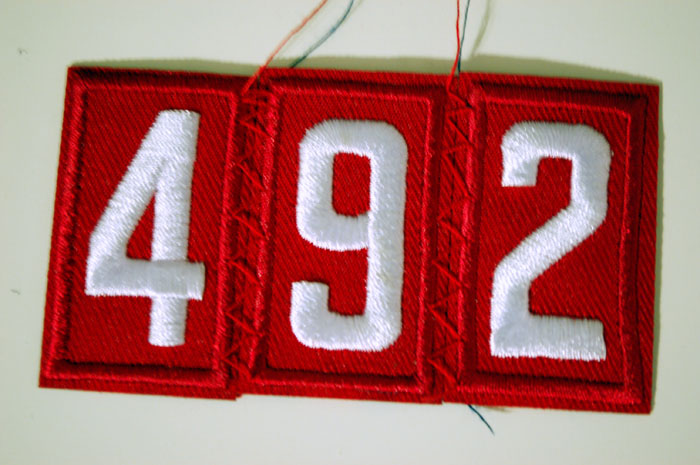 But, with this loose zig zag, you can manipulate them, and line them up as you place them on the shirt…

Once they’re stitched together, place them on your shirt, tape them down and sew along the top edge first, making sure that as you stitch, the tops are exactly lined up…that’s easier when they’re attached. 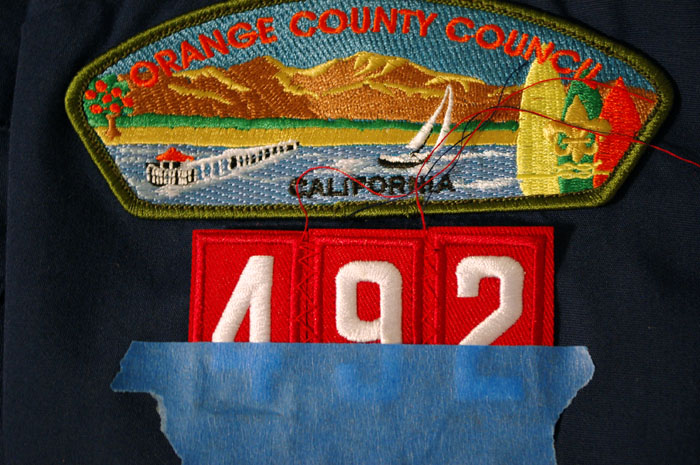 Sew around the perimeter of the 3 patches first, then remove the thread from your zig zag stitches. 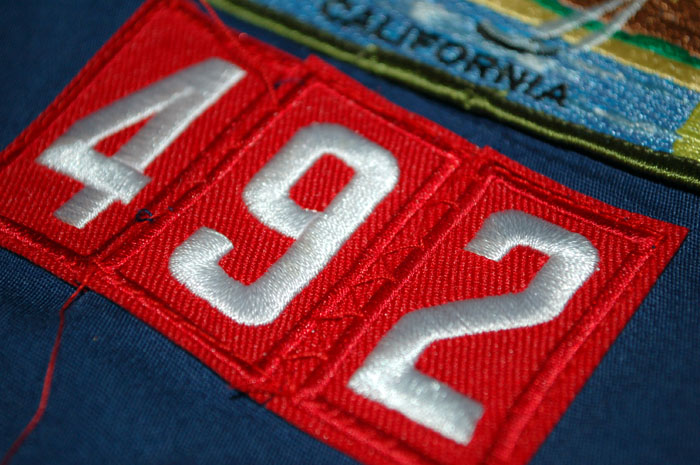 and lastly, stitch up and down the inside edges of each number.

I hope that helps someone!  Happy Scouting!