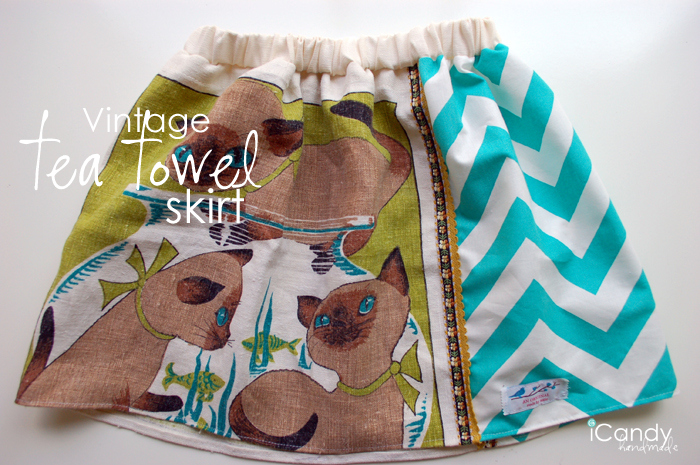 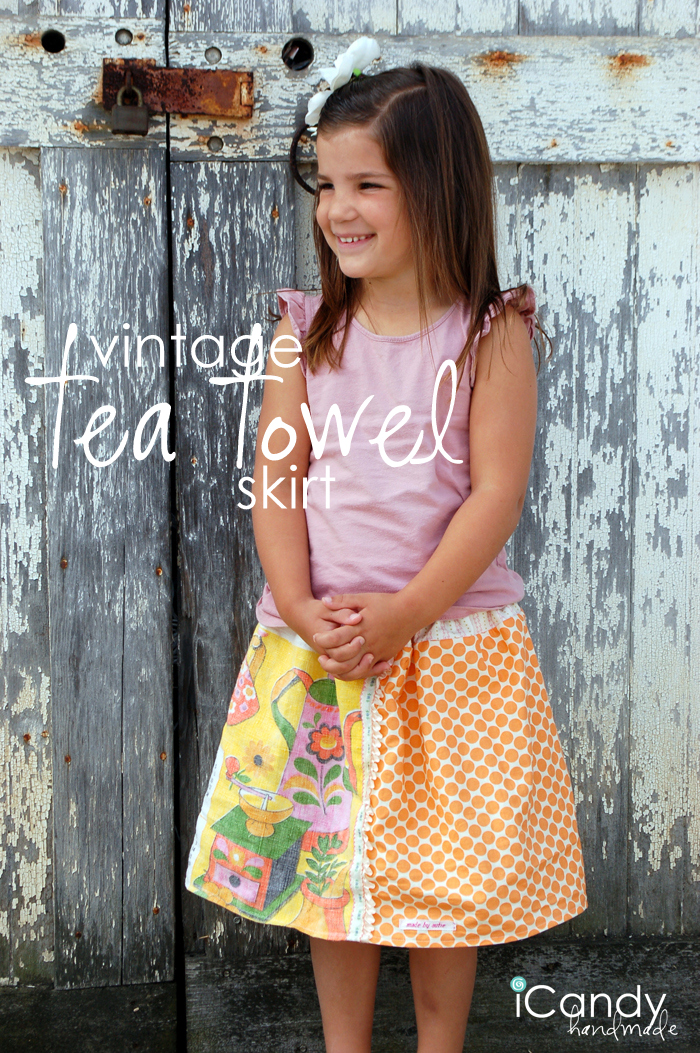 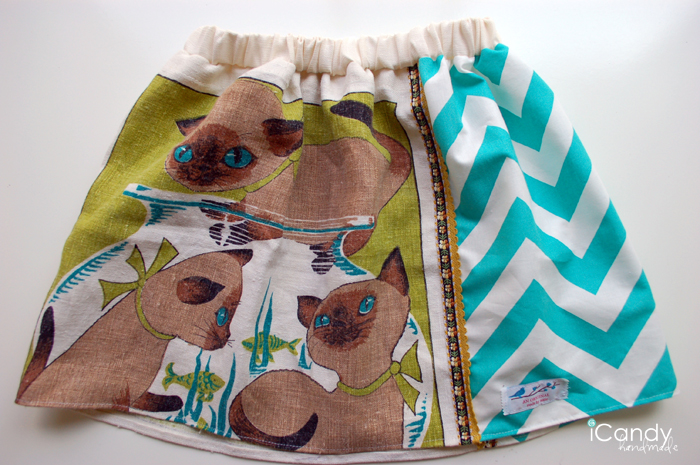 We scored a small set of vintage tea towels from Goodwill.  I’ve never seen these before, but I thought they were darling, and I’ve been so excited to start making stuff out of them!  Apparently back in the 70’s these tea towels were the hit thing.  Stylish ladies back then would hang these on their kitchen wall for the year, and then use them as a regular towel thereafter…  Fun, huh?  Well, I have a few more, but I let my daughter, Ivy, choose which ones she liked best so I could make her a couple of skirts for her to wear to school. 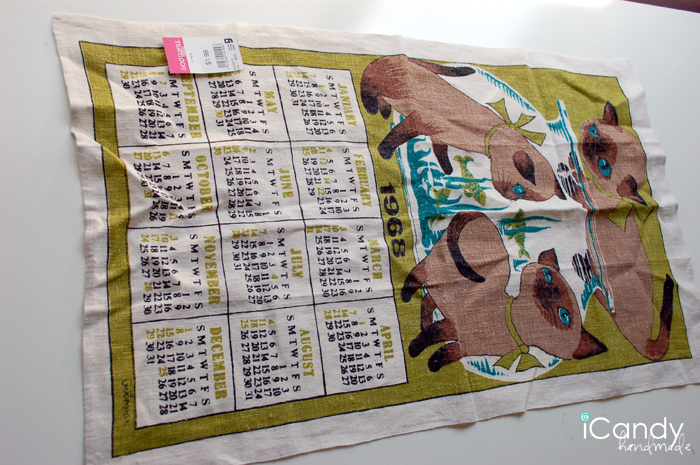 I wanted her skirts to be pretty full, and I knew that if I just cut the towel right in half and sewed the side seams together, it wouldn’t be full at all.  So, I picked out a coordinating fabric (she totally loves all things chevron at 5 years old) to add a little bit of color, and make it more full. 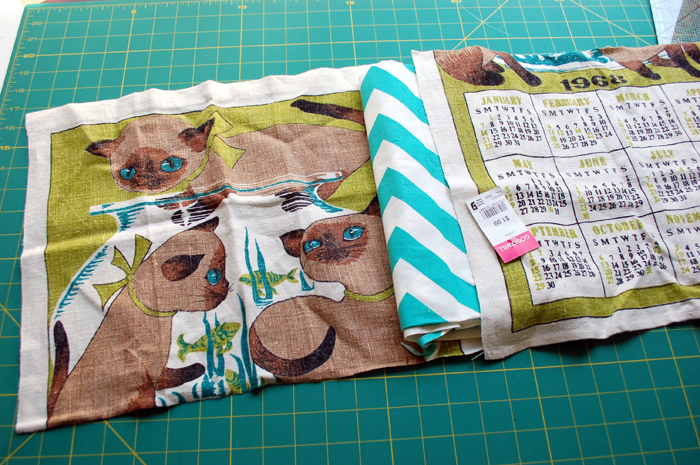 I measured the “height” of the towel after it was cut in half (it was 14″) and cut a 14″ x 14 3/4″ square.  The idea was that the chevron would show mostly on the one side, so you could see it both from the front and back, but left the towel as the main piece. 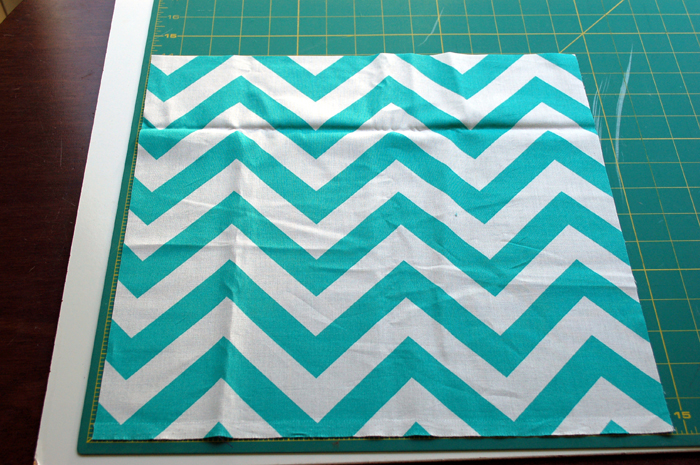 Once cut, I sewed the side seams together, making sure that both sides of the towel were facing up. 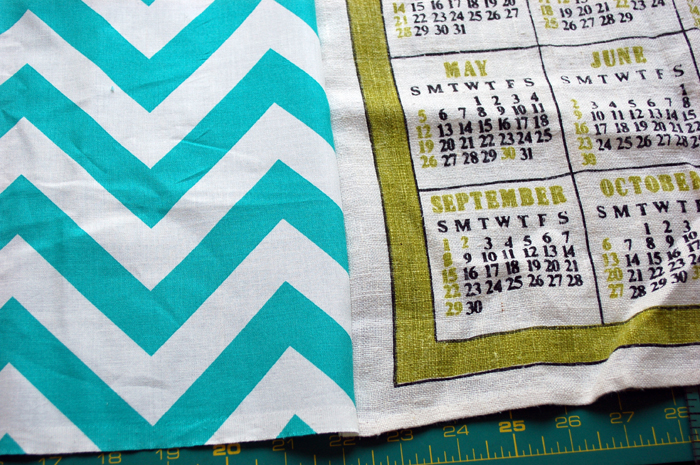 Next, I wanted to embellish it a little more than that, so I dipped into my hoarders stash of trims (you know the stash that you just like to look at, and for sure buy more of, but never want to use?) and layered a couple of my favorites right along both seams… 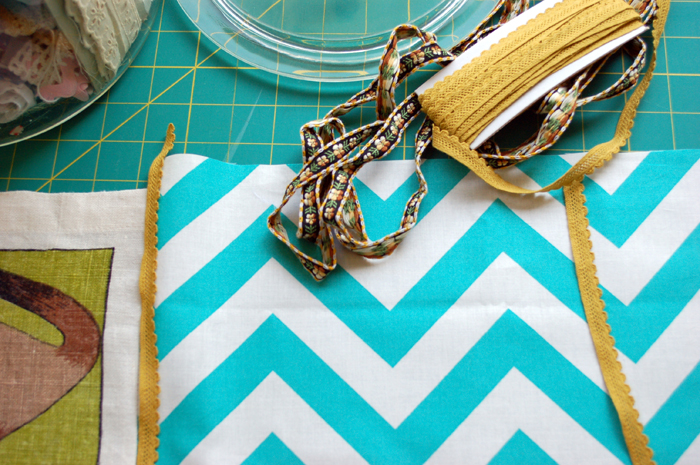 After the trims were in place, I sewed on the waist band.  (sorry, I originally did the waistband just wide enough for the elastic to fit through, but i didn’t love the way it looked, so I went back later, unpicked it, and recut the waistband larger…so these next pics don’t match.  :))  For my daughter, I cut a 6″ strip of waist band fabric and cut that strip to be the same length as the skirt pieces all laid out flat… 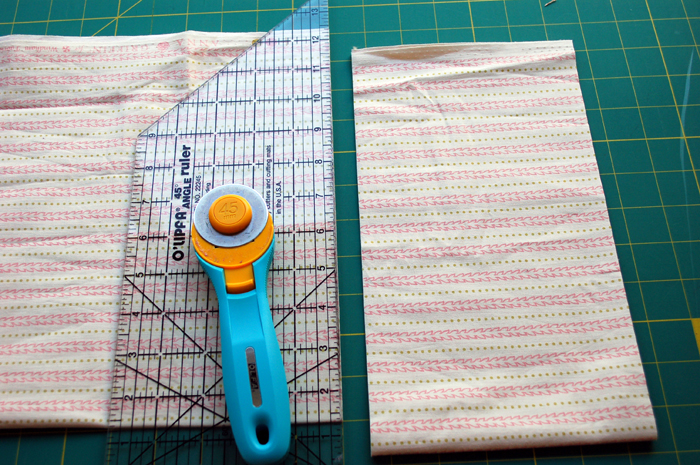 Next, I folded that 6 inch piece in half, sewed it together at a quarter of an inch seam, and then sewed a casing line to be 1 1/4 inches down from the fold…You can see the two stitching lines in the below picture. 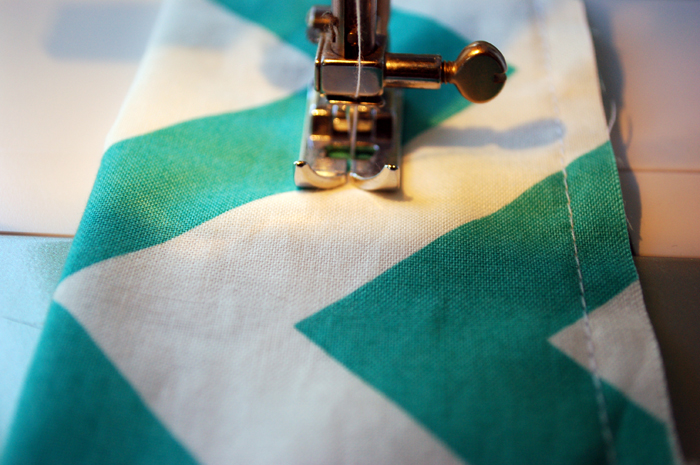 (now  back to the original waistband.)  I serged the raw edge of the waist band/casing to the top of the skirt piece. 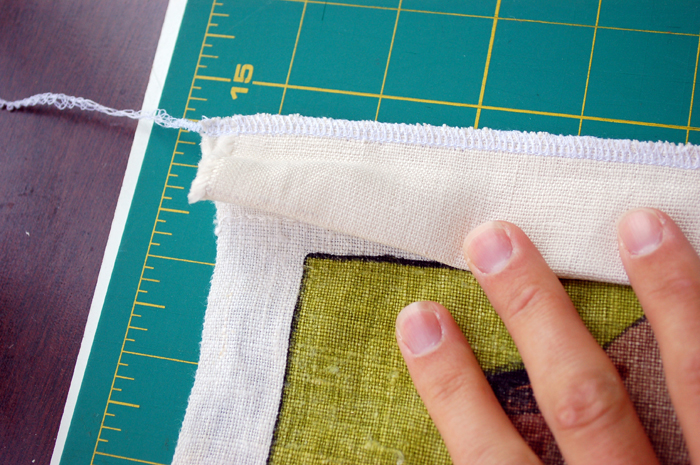 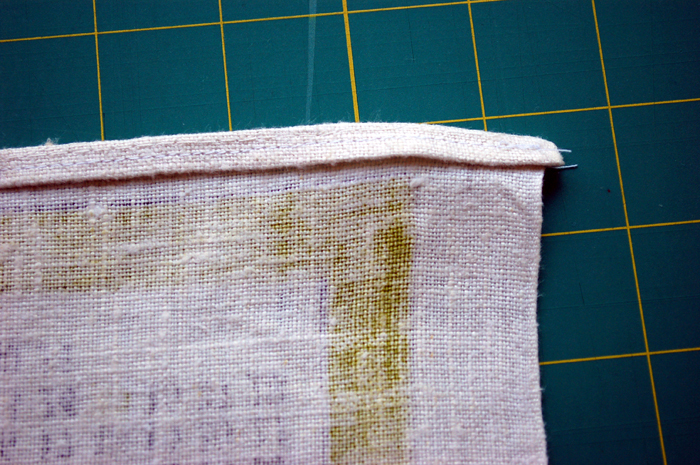 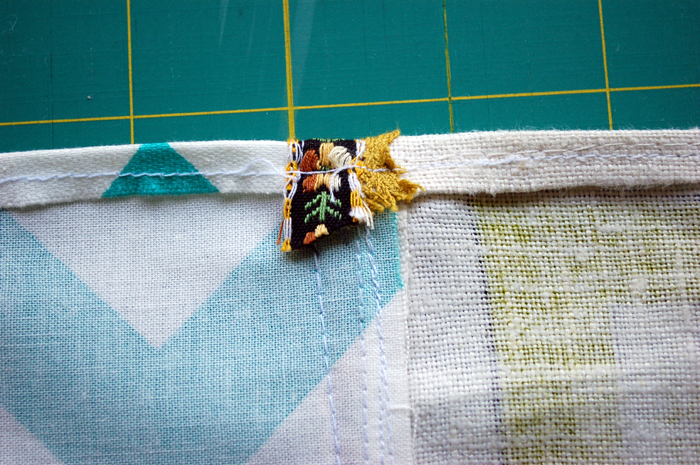 Finally, feed that 1″ elastic in through the casing: 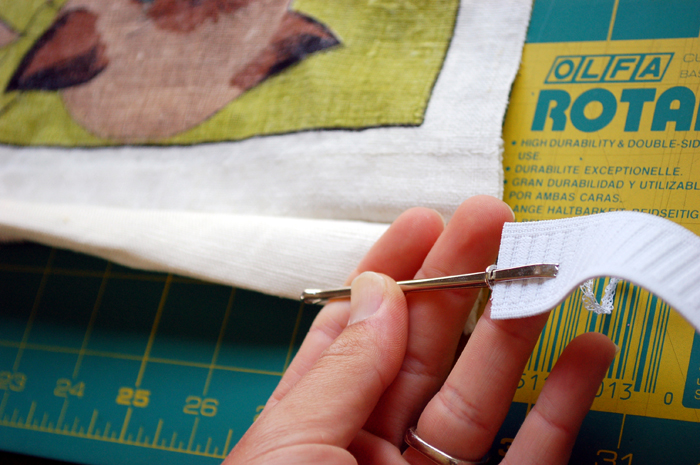 Pin the ends in place: 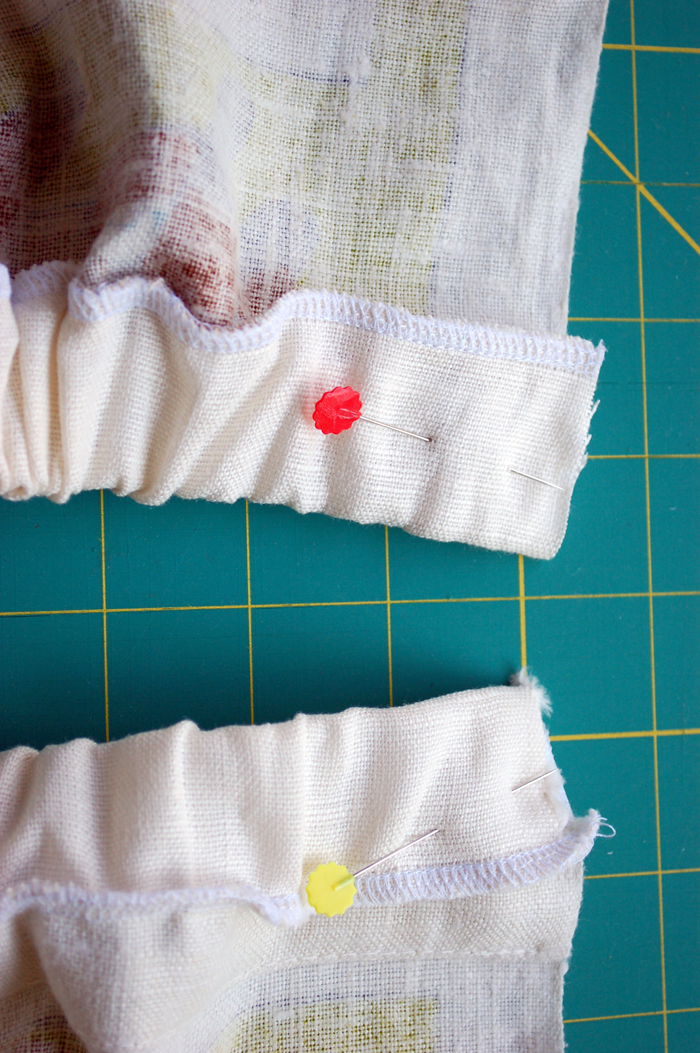 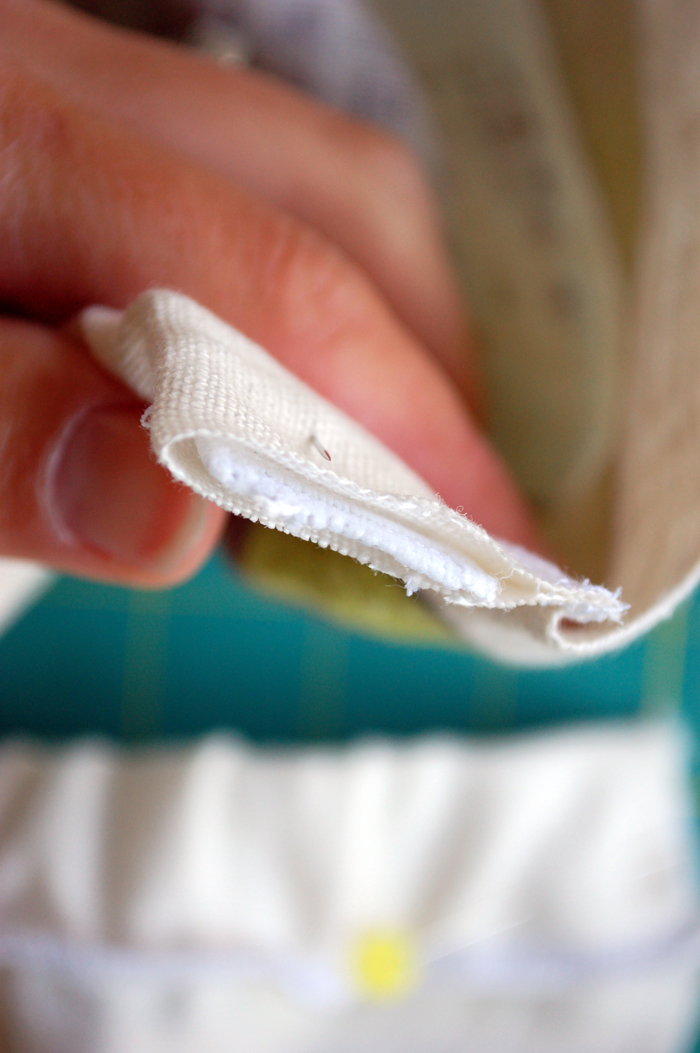 and lastly, sew the two towels edges together, all the way up to the casing. 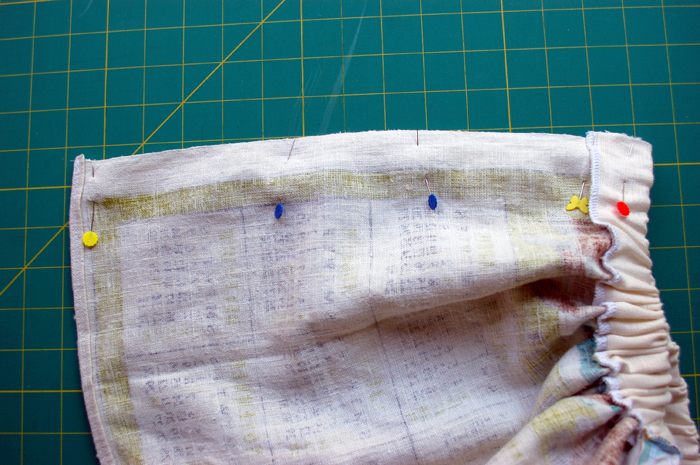 done.  Keep your eyes out for some fun tea towels to do this project too!  I know they even have fun holiday ones at Target ( I have a certain pumpkin one from Halloween that would make such a cute skirt! 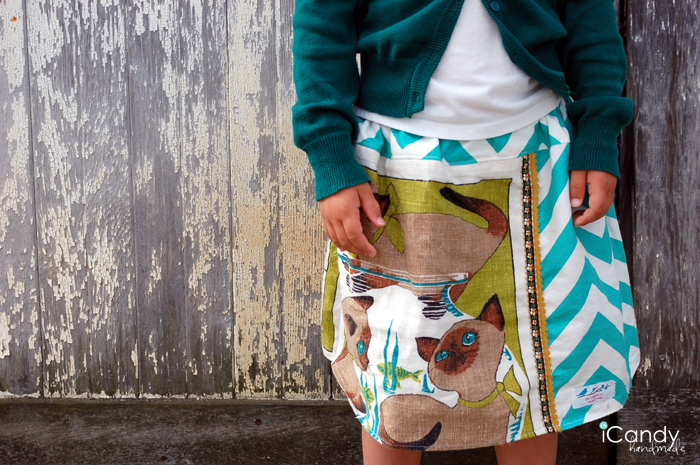