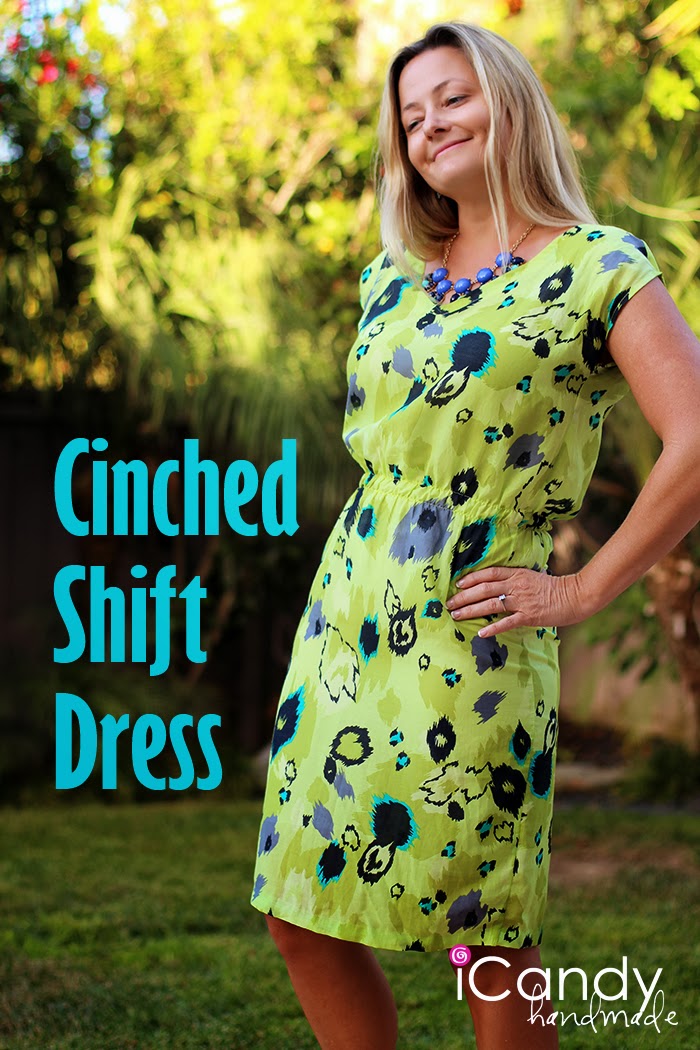 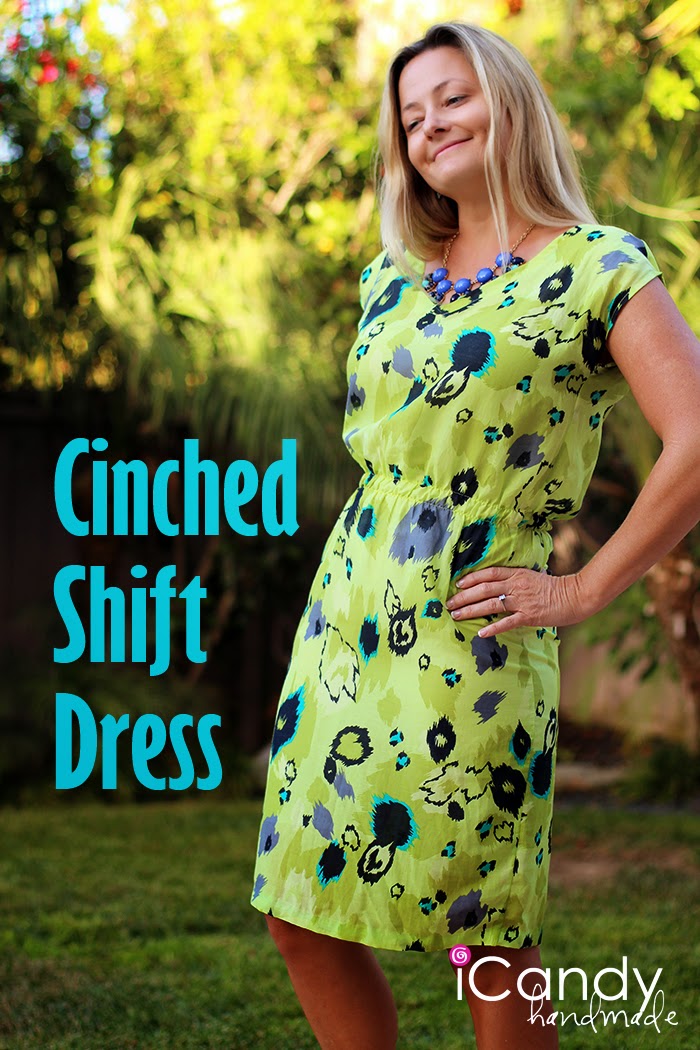 A couple of months ago, I was out shopping, and found a shift dress (similar) that had a cinched waist. I love these dresses, but sometimes feel like you have to be a size 0 to look good in them. But the dress was cute, so I thought I would give it a try anyway.

The dress I tried on was a striped stiff knit, with a seam down the middle.  It was cut on the bias so the stripes ended up in a V chevron pattern.  It had a high low hem.  I tried it on, not expecting
very much, and was pleasantly surprised!  It actually looked pretty flattering.  Except it was too short for me to be comfortable in.  But I looked at the construction carefully, and decided it wouldn’t be too hard to make. 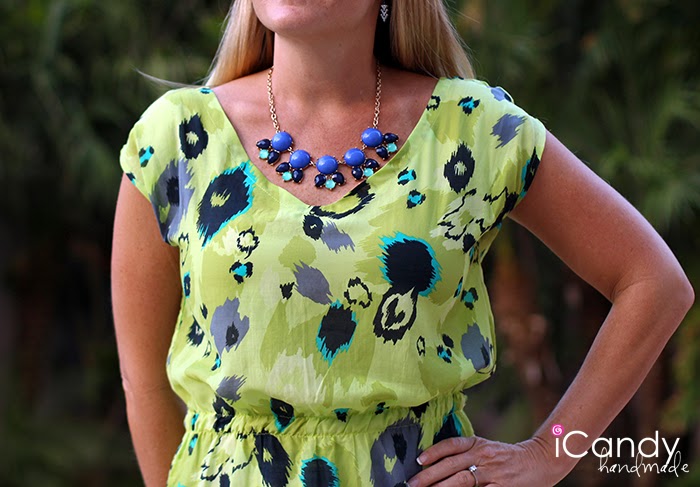 At the end of August, my family and Autie’s family met up in Palm Desert for our annual trip.   While we were there, we were talking about shopping and dresses and I found out she had bought that same dress and had it with her.  So great- because I could now trace the pattern.  I opened out a Trader Joe bag and got to work. 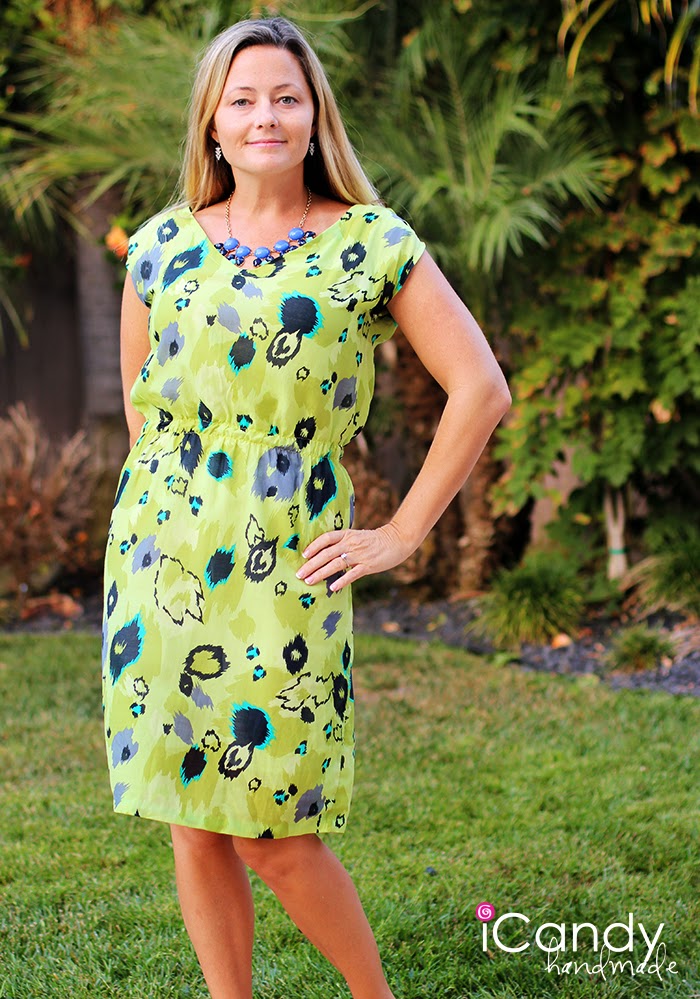 Flash forward to last week.  I HAD to have a new handmade dress for Sewing Summit.  Its a good thing my husband was out of town the day before I left, because I made that day and night super stressful adding this in. Of COURSE I waited till the very.last.minute to make it… He wouldn’t have understood how important it was to fit that in to my crazy day. 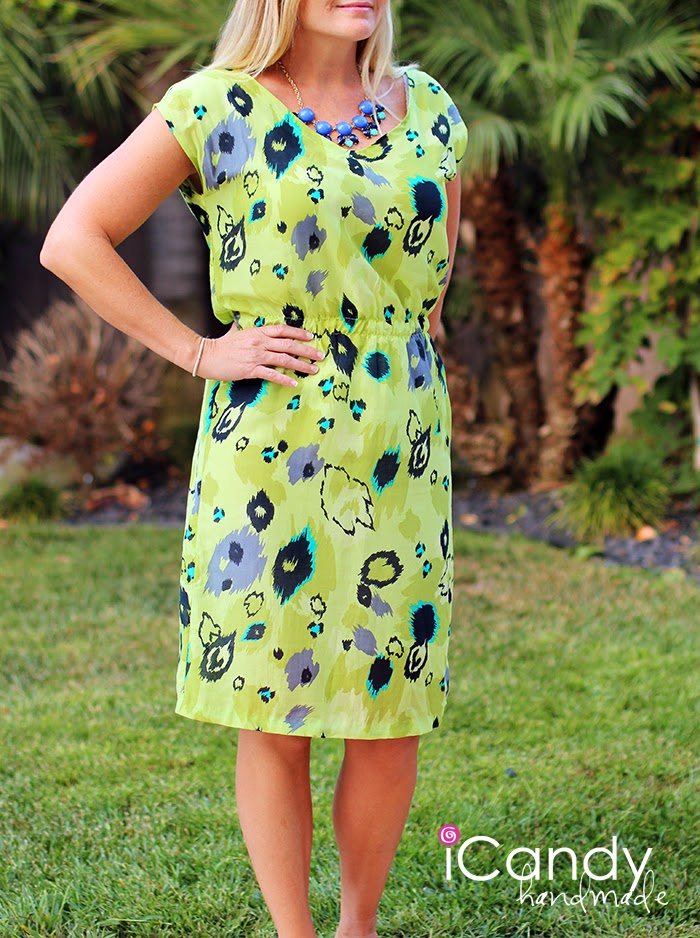 But it was.  I used this gorgeous silk cotton I had bought at Mood during fabric weekend.
The dress came together very easily.  And then I tried it on.  There wasn’t enough ease in the hips. (The original dress, cut on the bias, accounted for the extra ease.)

It fit, but there was a slight boxiness around the hips which no one wants.  At that point, it was almost 10pm and I still hadn’t packed.  I was exhausted and knew I had to get up at 4:30 in the morning, so I just added a jean jacket and it solved the problem.  But it was still a bummer.  This was one of my favorite fabrics I had in my stash.  Muslins, people! 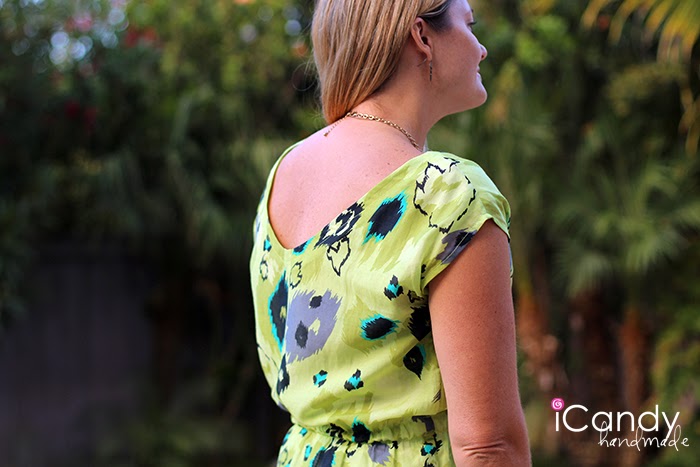 I wore it with the jacket on Friday night, and then tried it on again later for photos… and guess what? Either I lost weight (not likely 🙂 or the dress stretched a bit!  I can now wear it without the jacket. YAY!  I just can’t wash it.

So- I don’t have a tutorial for you YET… but I am going to make another with the perfect fit and hopefully will have one for you soon!