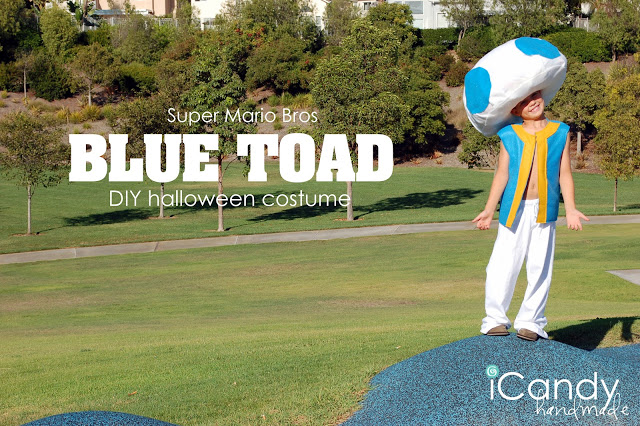 When I asked my 6-year-old what he wanted to be for Halloween, he knew right away:
Blue Toad.
You know, from Super Mario Brother’s?  The Toadstool guy.  Not the regular red one, but the blue one.  We’re very particular around here. 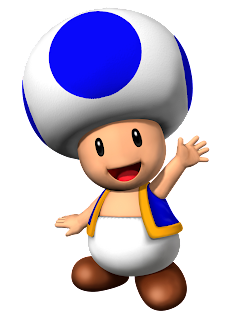 oh my, how this costume makes me whistle the old-school Mario theme song! 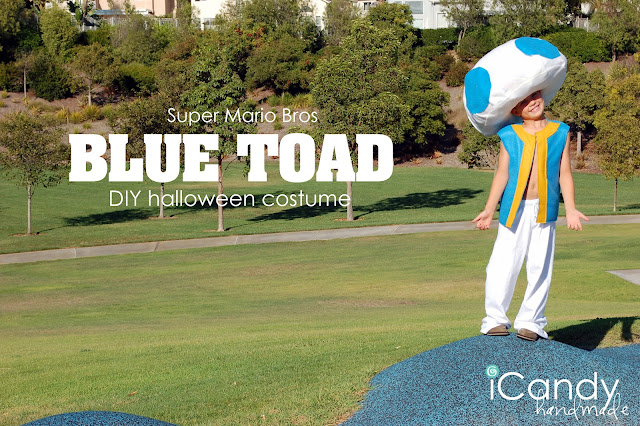 No chance they sell that costume, right?  and secretly I was glad because that meant I had to scheme up a way to make it happen.  Easy answer: felt.  Here’s what we came up with
Max and I had fun making the hat together… No sewing involved at all.  The vest was a quick sewing project with felt that a beginner could do, and then we just bought some white sweats.  easy, right?! 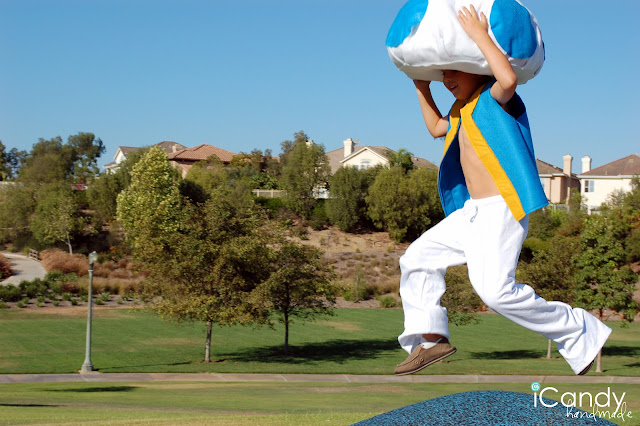 If you’d like the pattern for the vest (a basic pattern that would work for a number of costumes, like a pirate, or a cowboy… click {here} for the Google doc.
Otherwise, here’s a quick tut on how we made the hat!
Supplies:
-lots and lots of plastic grocery bags
-packing tape
-youth-sized sombrero (Target)
-white felt
-blue felt
-scissors and hot glue
The Project:
To start the project, here’s what you need… 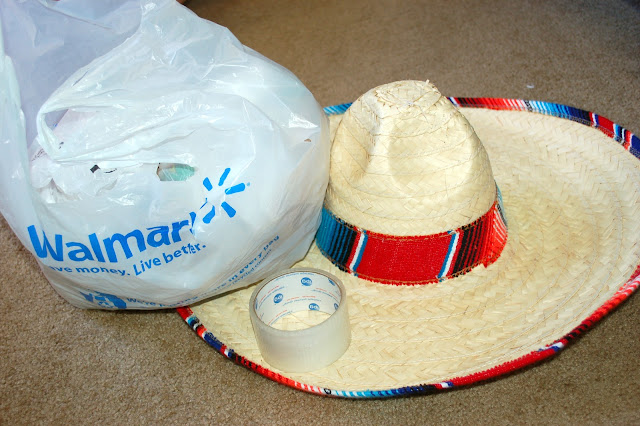 Max and I sat around and balled up old grocery bags, stuffed them onto the sombrero as tightly as we could… 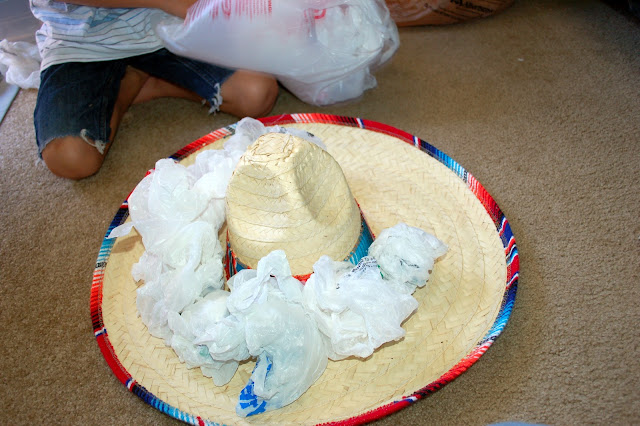 …until we got a shape that sort of resembled the mushroom shape we were going for. 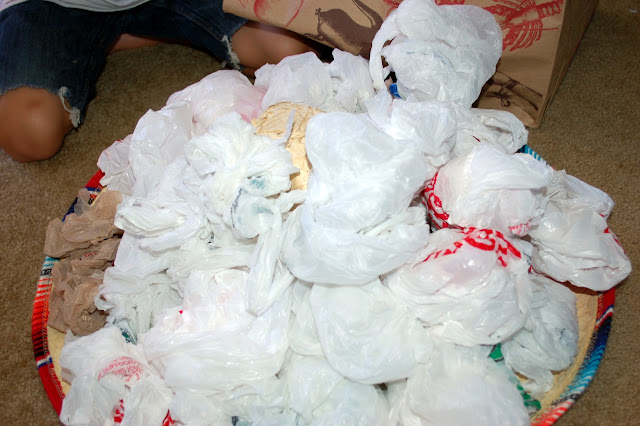 Once there, we used packing tape to hold the bags in place.  After the tape was down, we decided that the shape wasn’t quite right (we needed a little more heighth) so we added another layer of bags, and another layer of tape.
We adapted this method from a jelly-fish costume we saw in Family Fun magazine a couple of years ago! 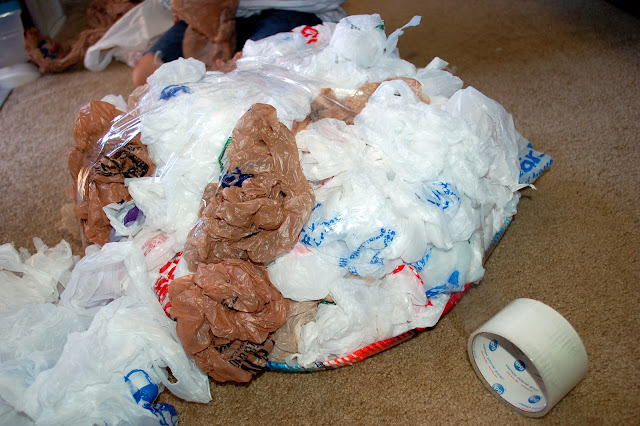 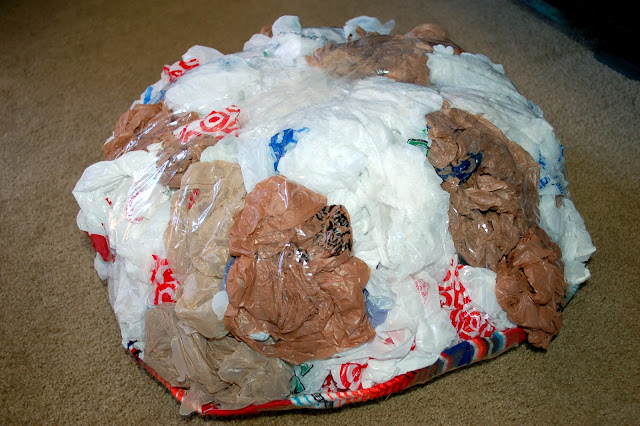 After we had the shape we wanted, I laid the hat upside down onto a big piece of white felt.  I measured the radius I needed to cover the whole hat as well as wrap around the underside. 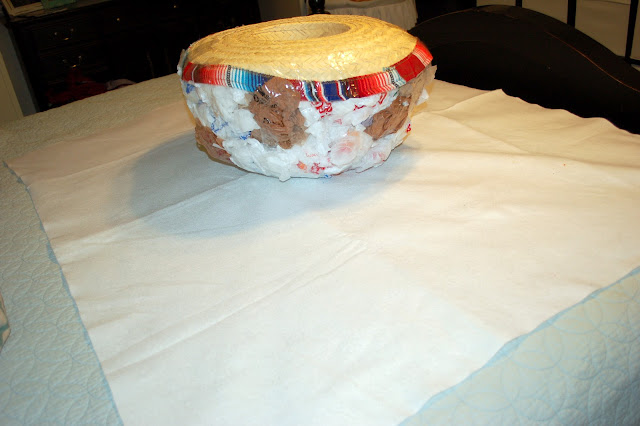 With the radius measurement in mind, I folded the felt in half, and cut a half circle… 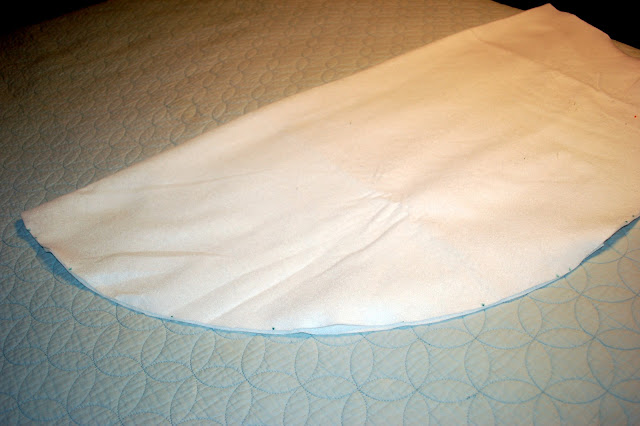 Next, we gobbed some hot glue onto the top of the mushroom, and laid the felt on top of it. 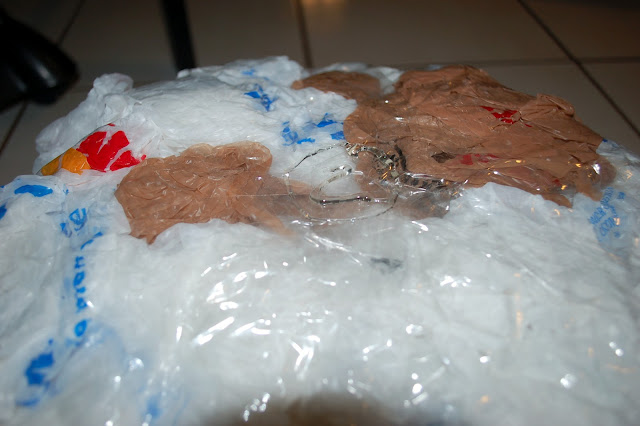 And then slowly but surely worked our way around the hat with hot glue, trying to make it lay as flat as possible. 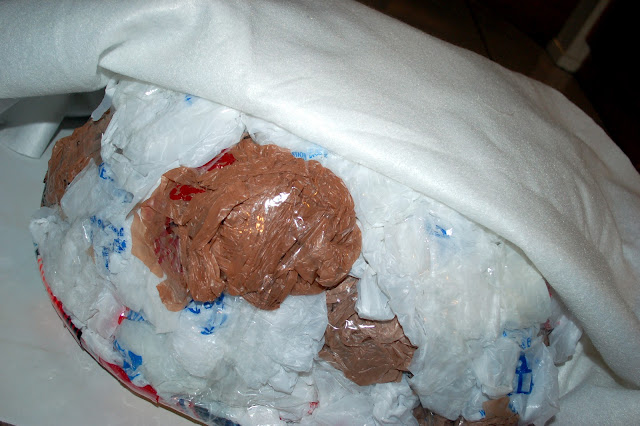 When the entire top of the hat was covered, I flipped it over, and tried to nicely tack-down the under side. 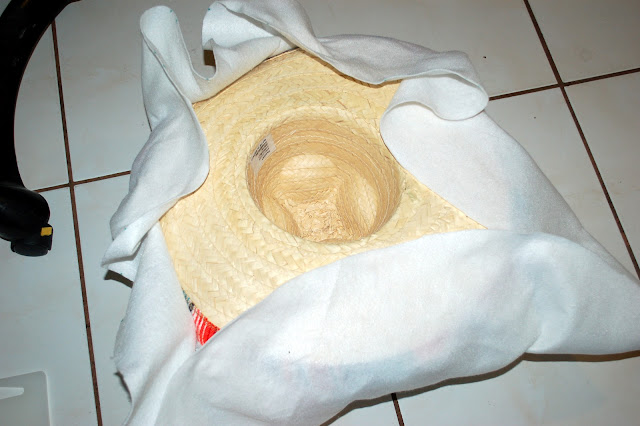 …folding and pleating, pleating and pulling… 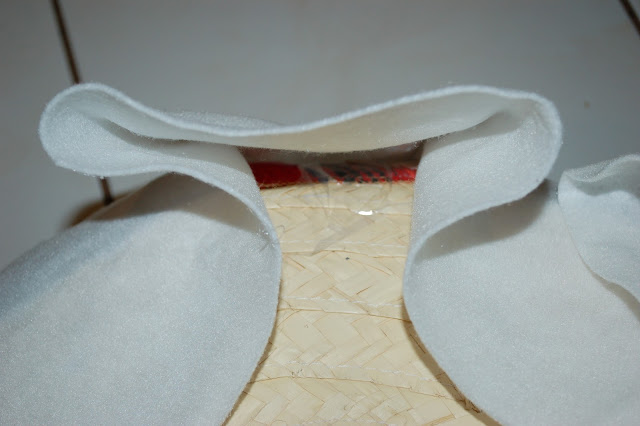 The underside was not my favorite, and not what I had in mind, but I’d gotten this far. so I kept on keeping on. 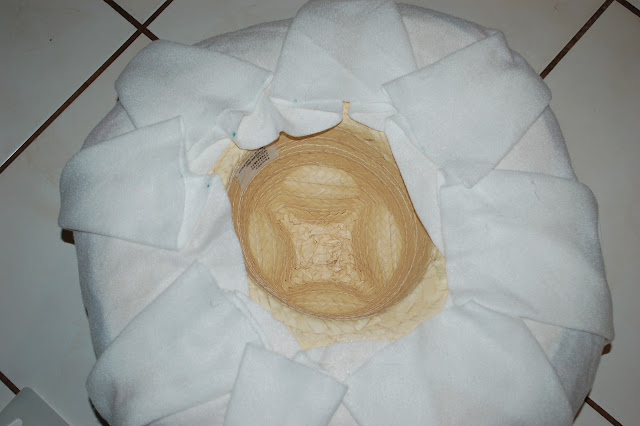 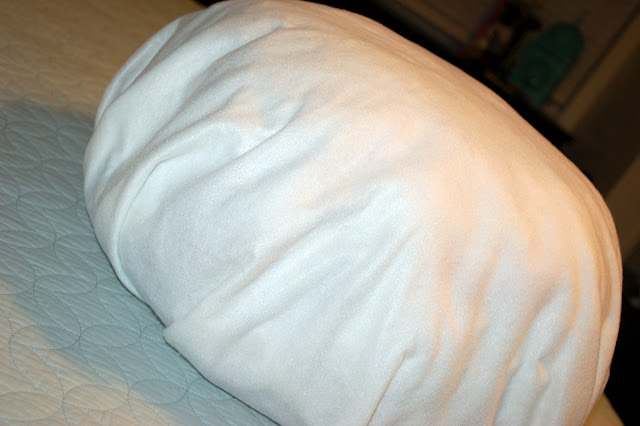 I took a break from thinking about the underside of the hat, and cut 5 circles from blue felt for Toad’s spots.  1 circle for the top of the hat, and 4 for around the outside.  I hot glued those into place as well. 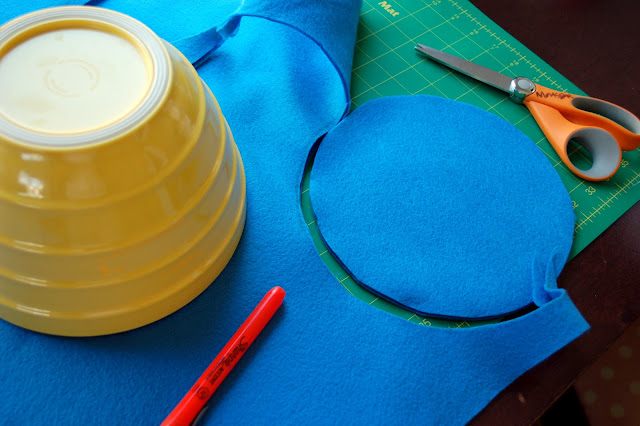 Bottom of the hat re-visited: 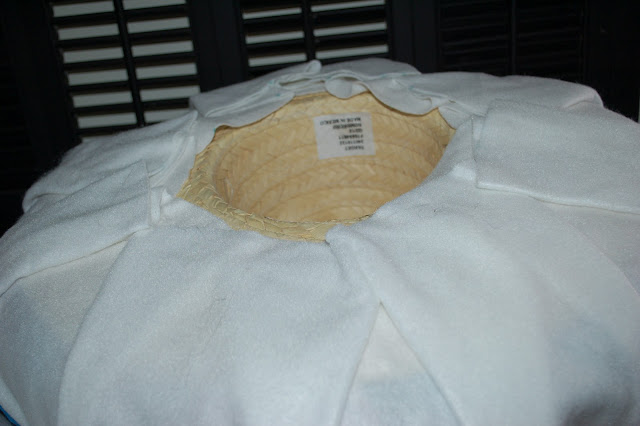 I laid the hat onto the rest of the white felt, and cut a circle shape around the outside of the hat as best I could. 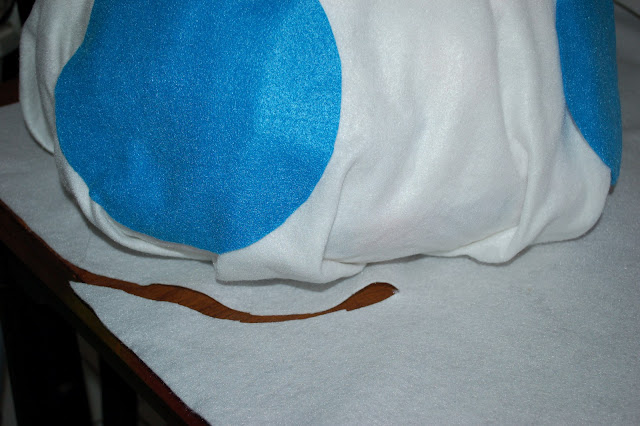 I wanted the circle to just cover the underside of the hat, and not really be seen from the top, so I made sure that the circle was smaller than the hat. 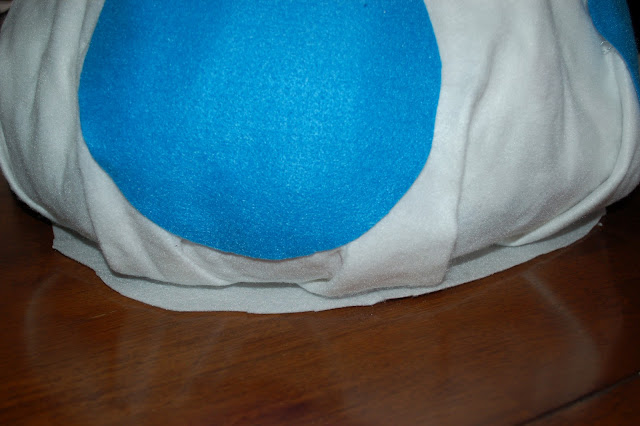 Next, I hot-glued that circle around the bottom of the hat, covering the head hole, and making sure that the glue was right up close to the edge, so it wouldn’t be loose. 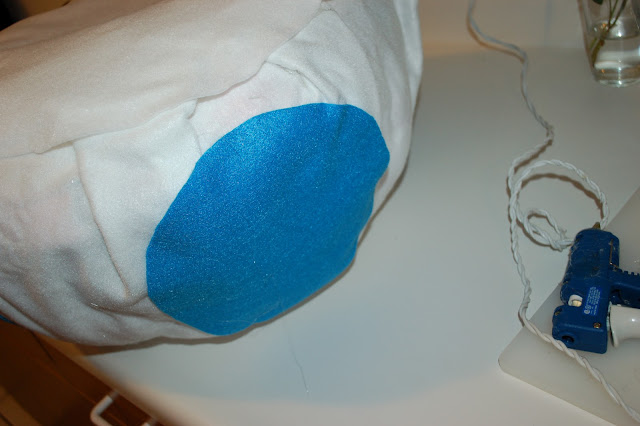 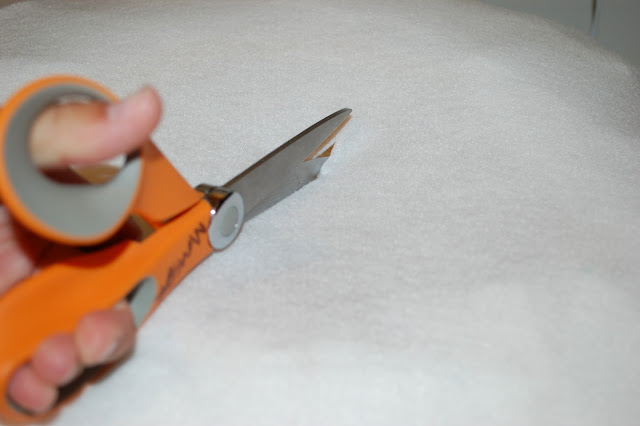 {this made some room for his head while still allowing the underside of the mushroom to look nice and clean.} 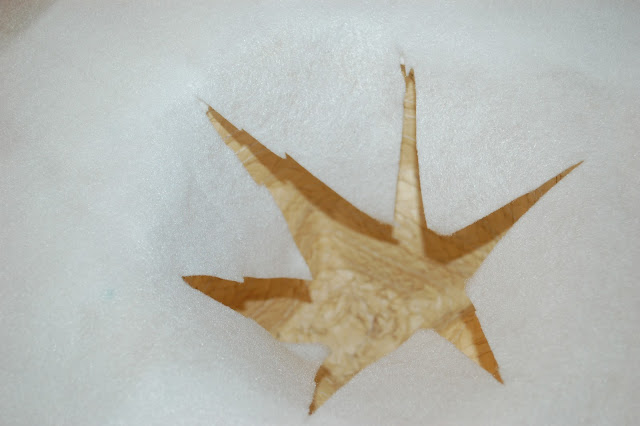 Then I hot glued them down to the inside of the head hole.
problem solved. 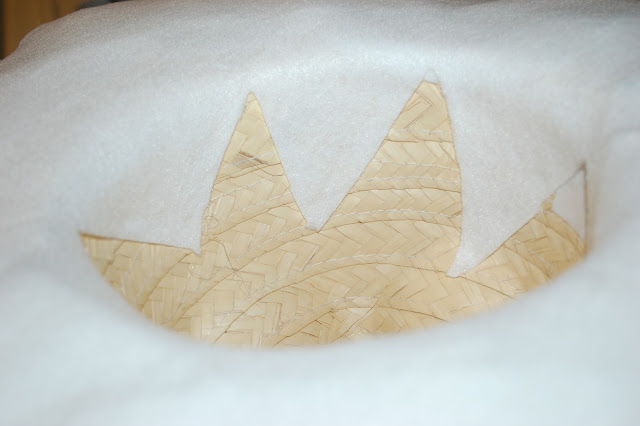 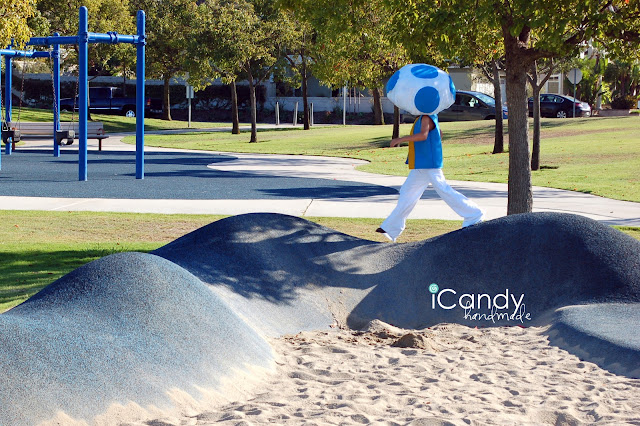 Quick Instructions on the vest, that again, you can get {here}
-Cut out  blue pieces of felt
-Cut out the border gold trims from gold felt
-Sew gold trims down to BOTH layers of blue felt on both the right and left sides of the vest front.
-With right-sides-together, sew left and right fronts of vest onto both layers of the vest back
-With right-sides-together, sew side seams together through all 4 layers of blue felt.
-Turn right-side-out and top-stitch around arm holes and the base of the vest.
ta-daa! {super easy!  questions? let me know!}