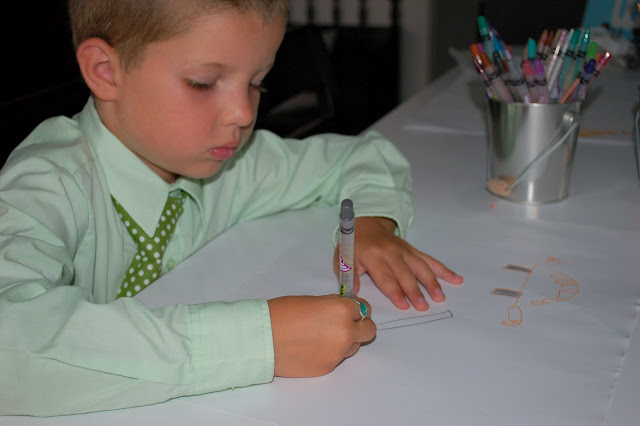 I enjoy being creative!

In the hum-drum that every day life can become- laundry, dishes, making beds, picking up toys, etc, having a bit of time for me to be creative is what makes me so happy.  I’m a better mom, a better wife, and am more happy with myself as a person when I have that time.  With that being said, it’s obviously a big part of my life, and one reason why I love to blog so much.  I desperately want my kids to enjoy being creative as much as I do.

One of my favorite things to hear my kids say, while I’m eavesdropping on their pretend-play wiping the kitchen counters down is “…and pretend that I did such-and-such.”  While they are playing, they spell out their story, with each sentence starting that way.  I love to hear what they come up with, how their imaginations work, etc. While we draw and color and imagine up a storm around here, I don’t often sit down with my kids and explore their creativity very much.  (I talk to them about what they’ve drawn, etc, but I don’t generally take a walk through their creative processes)  Today, I had the opportunity to sit down with my 5 year-old son, Max and do just that.  Instead of creating something for him to wear, or something for him to play with, I was able to help him create something himself, in conjunction with an upcoming contest. 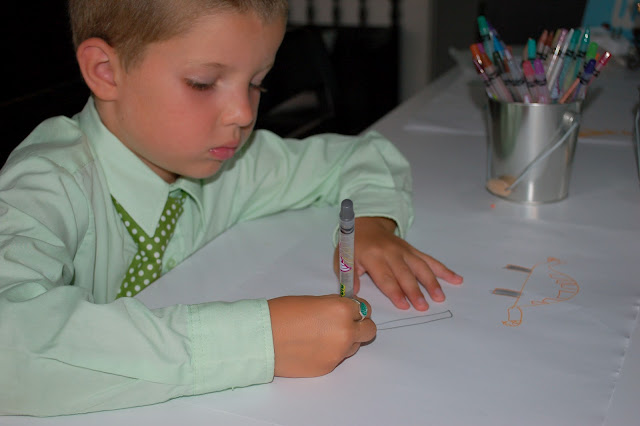 We were recently sent a couple of the Vtech Switch & Go Dinos to play with.  (both of my kids are OBSESSED, girl and boy, by the way)  If you haven’t seen this new set of toys, it is a series of dinosaurs which transform into a vehicle.  The Stegosaurus changes into a race car, the Spinosaurus turns into a jet, etc.  But they’re not your average dinosaurs.  My favorite part about these dino’s, other than the fact that they switch so easily from vehicle mode to dinosaur mode, is that while in dino-mode, you can push a button, and it tells you different facts about that particular dinosaur.  FUN!  They come equipped with an LCD screen for customizable animations that prods your child’s imagination and allows a stimulating 2-in-1 play experience.  There are 7 of these unique Dinosaurs in the series, and retail for $15.99…whether you’ve got a Dinosaur-lover, or a Truck-lover, these Dinos are perfect (and like I said, my 3 year-old little girl is enthralled with them, too!
After playing with a couple of these Switch & Go Dino’s, I asked Max if he’d like to create his own Switch & Go Dino with me.  In essence, he was going to make the prototype for their newest toy.  He was so excited, and I was so excited to see what he came up with! 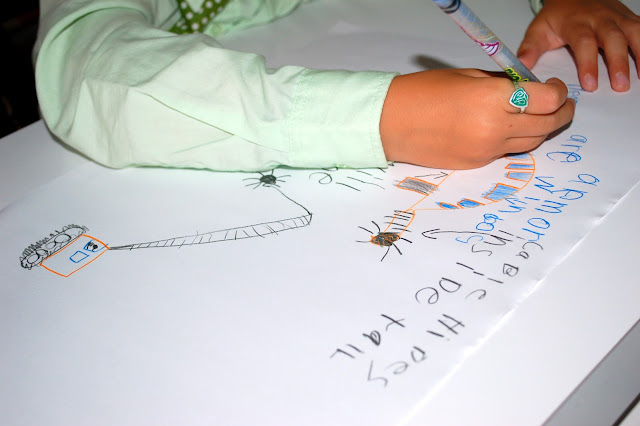 I took a couple of pictures of him working, and also took a video of him explaining what he came up with!
Here’s his “flow map” as he called it, of the Euoplocephalus which transforms into a Wrecking Ball Crane. 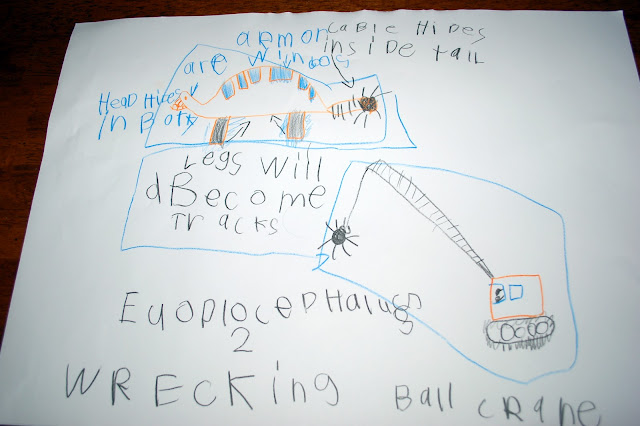 It was 30 minutes with him that I reveled  in as I could see his little gears turning, and getting excited about what he’d think of for it to do next!  I need to do it more often!
Here’s the video of his explanation: (he’s cute, I know!)

So, back to this contest I mentioned earlier!

Vtech is challenging kids to transform their imagination with the Show and Tell with Switch & Go Contest.  All you have to do is to upload a 15-30 second video (just like Max’s video above) to the Vtech facebook page of your child’s homemade Dino creation (and they can do this in a number of ways)

o   1. Draw: use markers, crayons, paint or pen to sketch your creation on paper
o   2. Build: use foil, paper, cardboard, or any non-branded household items to build your Dino
o   3. Customize: Update your own VTech Switch & Go Dino with accessories and fun props to give him a new image!

Show them what your Switch & Go would look like, and Tell them what makes your Dino large and in charge.  You can have your child tell a story, name it, or share it’s roaring sound effects. Here are the details on the contest…and of course what you could WIN!:

·         From October 1 through October 15 cast your vote for the FIERCEST video…
·         One grand-prize winner will get a kids lifetime supply of educational toys from VTech AND a prehistoric adventure to New York City for the grand prize OR a Dino-themed, “ROAR-carpet” premier party for all your friends to show your winning video, which will air on a Nickelodeon hit show!
Fun, right?!?  I seriously had so much fun with Max, watching him create his own Dino, and it really didn’t take much time.  Your child will love not only creating with you, but also spending that time alone with you will be their favorite part!
Create something together, and upload your video!
You might be the big winner!
Remember: It’s EASY to enter! Simply DRAW or BUILD your own Dino for a chance to win! Purchase of a VTech Switch & Go Dino is NOT necessary to enter.
Let their creativity come through by having them tell the world what their dino looks like, what it eats, what it sounds like, and more – it’s THEIR VERY OWN DINO!