I came up with the idea to do a Wild Alphabet hunt a while ago, and originally thought it would be fun to do it with a bunch of the little kids in my daughter’s playgroup…and then I thought my older son would like it too, so I thought I’d include all of the kids his age and younger… But with Ivy’s birthday coming up, I thought it was a good excuse to try out my idea.  So here’s what we did.
Wild Animal theme, mixed with a little ABC power gives you a Wild Alphabet Hunt…
Ivy turned 2 (are you sick of hearing about Ivy’s birthday yet?)
So I only had three little activities for her and her friends to do…
1.) The Wild Alphabet Hunt: 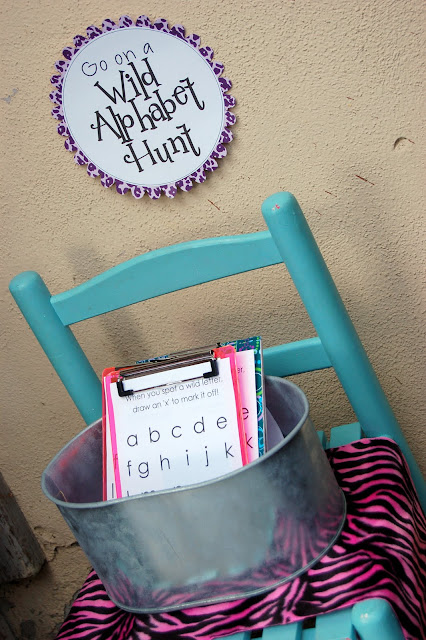 We had little clipboards with the letters of the alphabet on them.
I also had letters I’d cut out with my cricut hidden all over the yard.  (with animal print paper, mind you) The idea was for the kids to walk around and cross off the letters they found.  Luckily there were some older kids there who appreciated it a little more, but I think the little kids had fun with it for a second!  🙂 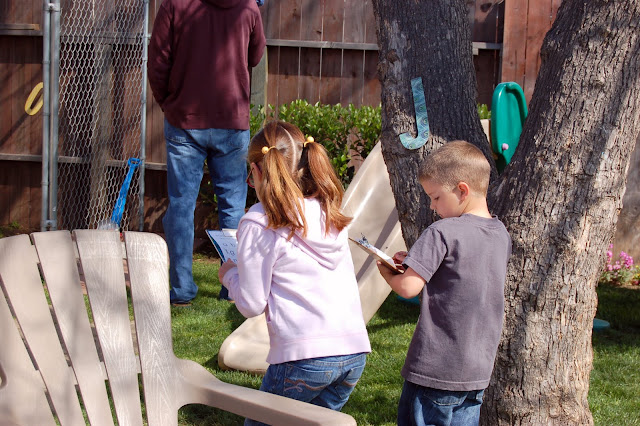 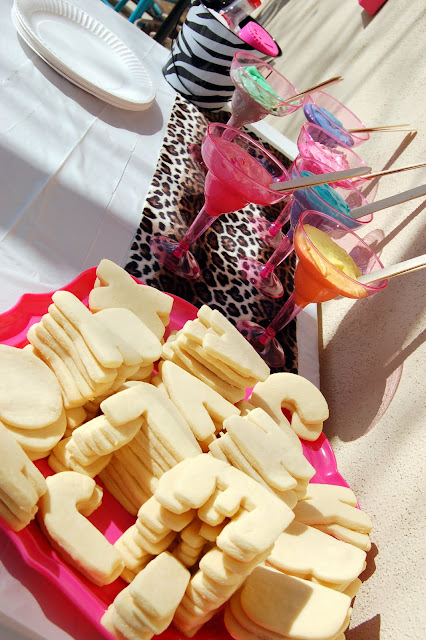 We had a table set up with the Letter-shaped sugar cookies…that spelled out each of the kids names that were coming.  They got to spell their names and decorate the cookies with fun frosting and sprinkles to make a name for themselves. 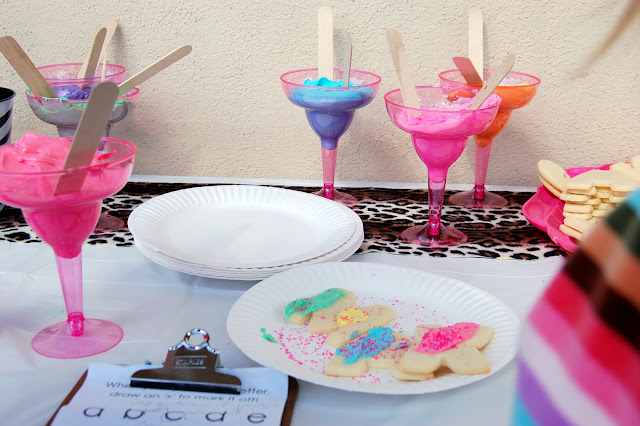 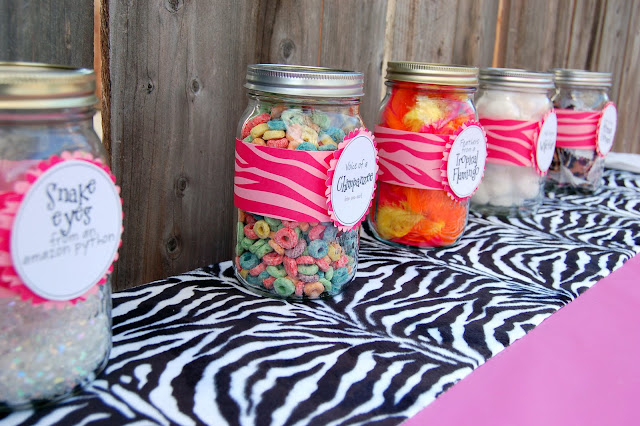 We had animal parts in jars…and I had printed off each kiddo’s initial for them to decorate with animal parts…(leopard-printed felt squares, tails from a wild hare (cotton balls), Feathers from a tropical flamingo, voice of a chimpanzee (you know, oooh, ooh, ooooh) and snake eyes (sparkly beads).
(got the letter print outs here) 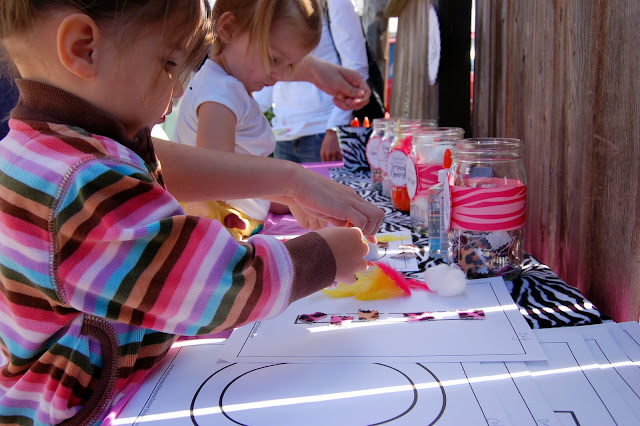 and the best part…the cake and cupcakes!  I enlisted the help of my friend Lindsey to decorate the cupcakes for me. (I am so not talented in the frosting department!)
She was amazing, and they turned out fabulous…I made the cupcakes, and past them on to her to do her magic! 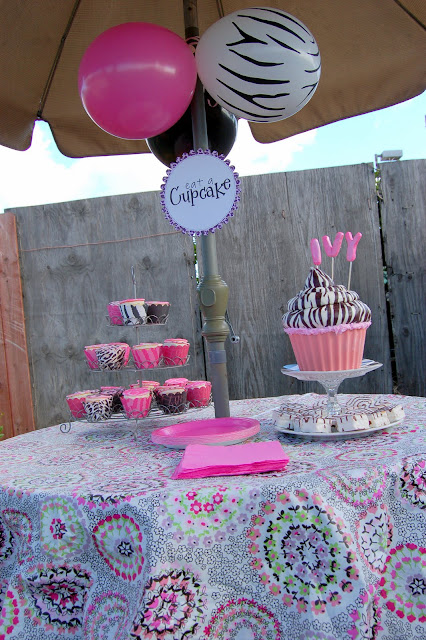 Can you believe that ginormous cupcake?
I had to buy those random zebra cakes from Big Lots for the occasion to cover up the bottom of the tray. 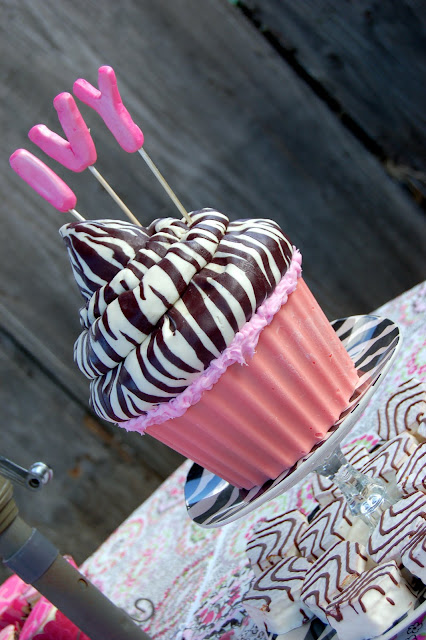 Here are the cupcakes…I’m still dying at how amazing they looked…and how amazing Lindsey was!
Leopards, Zebra and Giraffe!  i love them!
The cupcake liners were cut, again, with my cricut, using the Cricut lite, Cupcake Wrappers cartridge that I borrowed from a friend.  love it.
The bottom of the huge cupcake was made using those Wilton Melting candies that you can buy at Michaels. I just melted the candies as directed on the package, and swirled the ooey gooey around in the bottom of my cupcake-shaped cake pan.  After I had covered the whole wrapper shape, I just stuck it in the fridge over night.  The next morning, when it was time to bake the cake, I simply pulled the candy wrapper out, sprayed the pan with PAM like normal, and made my cake.  To fit the bottom into the wrapper, I did have to trim off a tiny bit of the bottom to allow it to fit.  (don’t spray the pan with PAM before you put the melting candy in it!     It will come out on it’s own!) 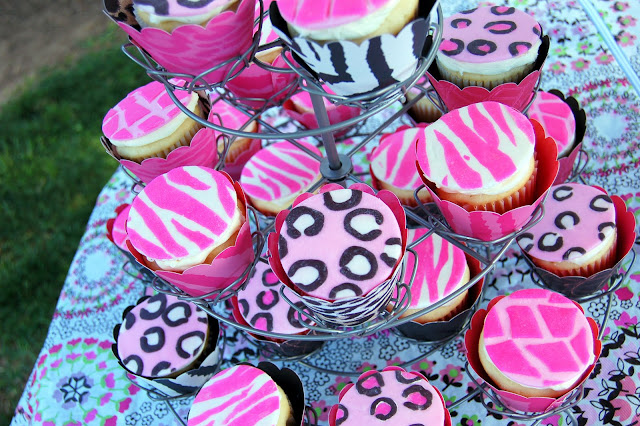 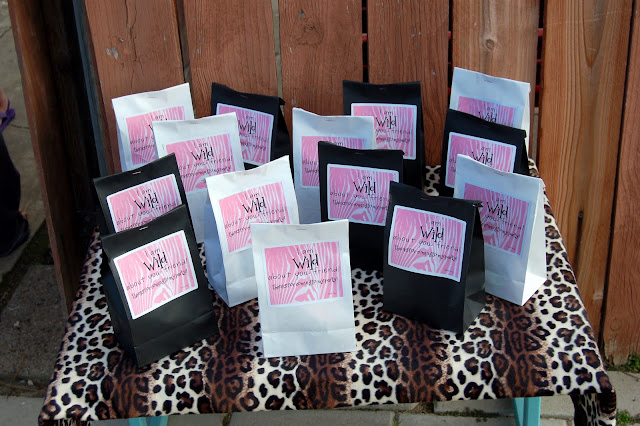 (said I’m Wild about you, friend! Thanks for coming to my paty, love Ivy)
we had letter stickers, animal stickers, zebra-looking snack bags, notebooks and pencils, mostly from Big Lots